Attracting Pileated Woodpeckers to Your Backyard 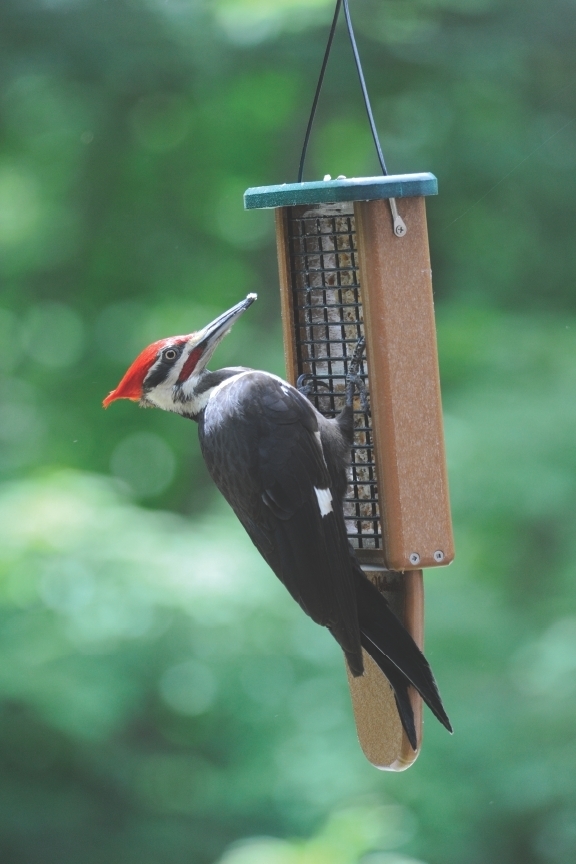 The Pileated Woodpecker is one of the biggest, most striking forest birds in North America, and is the largest woodpecker in the Simcoe County area. It's hard not to get excited when this bird appears in your backyard!  Nearly the size of a crow, it's striking black and white plumage is offset by a brilliant red crest. Usually heard before seen, they can be surprisingly tentative at feeders, usually taking the time to scout from a nearby tree before coming in for a meal. They are easily spooked by movement so if you spot one in your yard, take care to avoid any sudden movements that may frighten it away, even from inside the house.

In nature their main prey is carpenter ants, so keep a look out for them whacking away at dead trees and fallen logs, or keep an eye out for the results of their visits, large rectangular holes in the trees. The nest holes these birds make offer crucial shelter to many species including swifts, owls, ducks, bats, and pine martens.

The Pileated Woodpecker is a very large woodpecker with a long neck and a triangular crest that sweeps off the back of the head. The bill is long and chisel-like, about the length of the head. In flight, the wings are broad and the bird can seem crow like, but their undulating flight pattern gives them away (compared to the smooth flight of the crow). Pileated Woodpeckers are mostly black with white stripes on the face and neck and a flaming-red crest. Males also have a red stripe on the cheek (this stripe is black in females). In flight, the bird reveals extensive white underwings and small white crescents on the upper side, at the bases of the primaries.

Females sport similar plummage to the males, with their red caps only reaching about halfway up their head, with a grey patch between the beak and eyes, almost appearing to have a receding red hairline.

A Pileated Woodpecker pair are non-migratory, year-round residents. They remain together and defend their territory in all seasons, but are more tolerant of new arrivals during the winter.

The Pileated Woodpecker’s primary food is carpenter ants, supplemented by other ants, wood-boring beetle larvae, termites, and other insects such as flies, caterpillars,  and grasshoppers. They will also eat wild fruits and nuts, including blackberries, sumac berries, poison ivy, holly, dogwood, and elderberry.  At backyard feeders, Pileated Woodpeckers primarily visit Suet or Bark Butter®, but will also partake in seeds and nuts from time to time.

Pileated Woodpeckers can become regular and faithful visitors to your feeders, quite often coming in pairs, and over time may even bring their young to your feeders.  Large upright feeders, such as a the tail prop suet feeder in the photo at the top of the page, seem to be their preferred choice, but they are also comfortable on long wooden feeders, cylinder feeders and even your backyard tree when Birdacious® Bark Butter® is offered on it.

Pileated Woodpeckers are forest birds that require large, standing dead trees and downed wood. Forests can be evergreen, deciduous, or mixed. Here in the East, they are happy to live in young forests and are often seen in backyards of suburbs where there are large stands of trees nearby.  Nests are usually placed in a dead tree, preferable in a mature stand of coniferous or deciduous trees. They often have to battle for home-ownership with Wood Ducks, European Starlings, Red-bellied Woodpeckers, and Eastern Bluebirds.  They will not use a man-made nest box.