Attracting Mourning Doves to Your Backyard 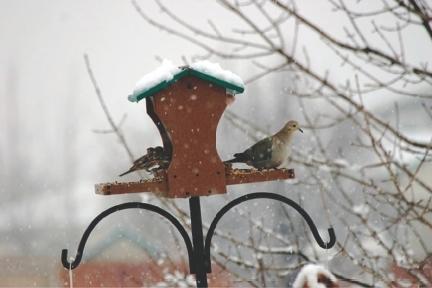 One of life's simple pleasures, often missed in today's world, is going to sleep with your windows open. To be gently awakened in the early morning by an enchanting chorus of bird songs is an experience that was common to many of our ancestors, but one that has rapidly disappeared in our modern society.

In contrast, the Mourning Dove really doesn't have much to be sad about. It has truly prospered from man's activities and is now one of the most abundant and widespread birds found in North America. It is estimated that almost 500 million of these doves inhabit the continent each autumn, earning it a ranking as one of the ten most abundant birds reported at all feeders.

Something else for them to be happy about is their potential life-span. While the average longevity for a typical mature dove is only about 1.5 years, the oldest known free-living Mourning Dove, as proven by bird banding research, was over 31 years old. This is the longest life-span ever recorded for any terrestrial bird found in North America.

So maybe the Mourning Dove isn't so sad after all . . . maybe it's just trying to wake you up early to fill the feeders!

Smaller than the Rock Pigeon, with a plump body, slender tail and small rounded head. Their colouring often matches their surroundings: a pale brown to buffy-tan overall, with black spots on the wings and black-bordered white tips to the tail feathers. Both male and female plumage are similar and generally cannot be used to distinguish between the two. No seasonal plumage changes. Juvenile plumage is similar to adults.

Doves and Pigeons are predominantly non-migratory, year-round residents throughout much of their range, but will move north for breeding. Here in Simcoe County you can expect to see most Mourning Doves year round.

Seeds make up 99 percent of a Mourning Dove’s diet making backyard feeders the perfect buffet. Mourning Doves tend to feed busily on the ground, swallowing seeds and storing them in their crop (an enlargement of the esophagus). Once they’ve had their fill, they fly off to a safe nearby perch to digest their meal. Mourning Doves eat roughly 12 to 20 percent of their body weight per day enjoy a variety of foods including: white millet, safflower, oil sunflower, Bark Butter and cracked corn.

Mourning Doves prefer to feed close to the ground. They will also use open style feeders with wide ledges, such as hopper feeders or seed tube feeders with a tray attached. They are easily spotted cleaning up seeds beneath feeders or feeding from hanging tray and ground feeders.

Unbothered by humans, Mourning Doves are not terribly particular when it comes to nesting and will choose spots just about anywhere: on the ground, in a bush or tree, gutters, eaves, etc. They will not use a nest box but may use a nesting shelf if one is offered. The Nesting Shelf may be placed under the eaves, inside a garage, or on the side of a building and should be mounted between 7 and 12 feet high.