Attracting Dark-eyed Juncos to Your Backyard 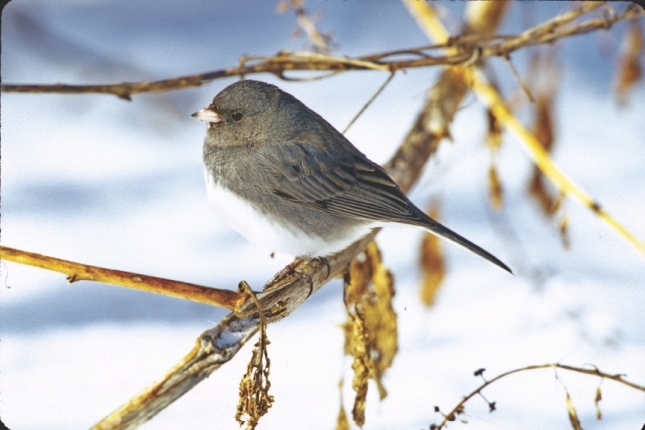 Dark-eyed Juncos are often called “Snowbirds”, possibly due to the fact that many people believe their return from their northern breeding grounds foretells the return of cold and snowy weather. Another possible source of the nickname may be the white belly plumage and slate-colored back of the junco which has been described as “leaden skies above, snow below”.

The Dark-eyed Junco is currently divided into six distinct populations that include the following: Oregon, Pink-sided, White-winged, Slate-colored, Gray-headed, and Red-backed Juncos. There are an additional 12 subspecies divided among these populations. Here in Simcoe County you can expect to spot the Slate-colored variety.

Juncos practice an interesting foraging method called “riding.” They fly up to a seed cluster on the top of a grass stem and “ride” it to the ground where they pick off the seeds.

Dark-eyed Juncos are flashy, sparrow sized birds with distinct grey and white markings. While highly variable in colouring between light grey to almost black, all sport an all upper grey throughout the head, back, wings and tail, with a bright white belly and tail feathers which flash in flight. Male and female plumage are similar, the female are generally paler. No seasonal plumage changes. Juvenile plumage similar to adult females.

The Dark-eyed Junco is predominately migratory. Juncos spend the entire winter in flocks averaging in size from six to thirty or more birds. Dark-eyed Juncos tend to return to the same area each winter. Chances are that you have many of the same birds at your feeder this winter that you had in previous years. Visiting flocks of juncos will usually stay within an area of about ten acres during their entire winter stay.  When migrating, female juncos move south before the males do, and adult females leave before the young females. Male juncos tend to spend the winter farther north in order to shorten their spring migration and thus gain the advantage of arriving first at prime breeding territories.

You can attract juncos to your yard by feeding a seed blend containing millet and hulled sunflower seeds, such as our WBU No-Mess LM Blend or WBU Deluxe Seed Blend.

While naturally ground feeders, Juncos will happily feed from our feeders, favouring open feeders such as Tray Feeders, Fly-Thru Feeders, and feeders with a wide base for easy landing, such as a Seed Tube Feeder with a Seed Tray attached. 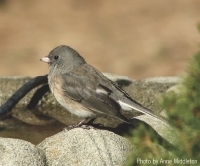 As winter and late-fall residents to our area, Dark-eyed Juncos are not here in Simcoe County during their breeding season and therefore will not be enticed by nesting options in our yards. During nesting season they typically nest in coniferous or mixed-coniferous forests on the ground or in bushes. Will not use a nest box even within their breeding range.  Juncos typically have two broods per year with the female building her nest and laying three to five eggs. The male does not incubate the eggs but does deliver food to the young and helps the female to defend against predators. The young leave the nest in 9-12 days.