Attracting American Robins to Your Backyard 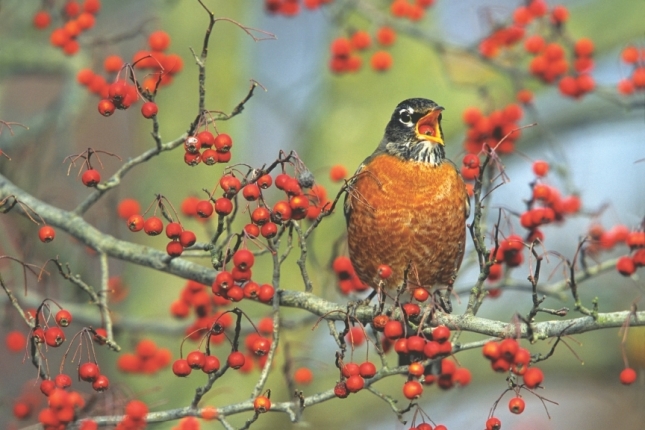 The stereotypical early bird, the American Robin is a common and familiar sight foraging for worms on lawns all across North America. Considered by many as the "first sign of spring", many American Robins actually spend the entire winter here in Simcoe County. Because they spend more time roosting in trees and less time in our yards, they're much less likely to be seen and are assumed to have migrated. The number of Robins who remain behind in their breeding grounds varies each year based on local conditions and food supply. Robins are attracted to open lawns and gardens with mature shrubbery and trees. While they eat a variety of insects and berries, it has been noted that robins can eat up to 14 feet of earthworms in a day!

Robins are fairly large songbirds at up to 28 cm (11") in length, with a round body, long legs and a fairly long tail. Male robins have a dark gray to almost black back and tail with the familiar rust/brick colored breast. The female is paler all over in comparison to the male. Often it is hard to tell the two apart unless they are side by side for comparison. Both sexes retain the same plumage year round. Juvenile robins have a spotted breast.

While Robins can be found year-round across much of the US and Canada, extensive seasonal migrations occur across large areas of North America. Some robins breed as far north as Canada and winter as far south as Mexico. While the majority of American Robins migrate to the south each fall, a small number of stragglers usually remain behind and endure the winter. The majority of over-wintering robins are males trying to ensure they have first choice of nesting territories in the spring. Females migrate to areas where food is more abundant to help ensure they are in top condition for the rigors of raising young in the spring. Male robins that migrate usually arrive on the breeding grounds up to two weeks before the females return.

While not your typical feeder bird, you can attract American Robins to your yard by placing live Mealworms, Bark Butter®, and/or fruit onto an open tray or fly-through style feeder.

Robins can be attracted to a feeding station by offering mealworms, fruit and a birdbath. It’s especially fun to offer mealworms during nesting season when the robins can stop and pick up a mouthful of tasty worms to take back to their babies. They will fill their mouth until you think nothing else could possibly fit inside and still continue to try to pick up more, dropping some in the process and then trying to pick those back up. It can be very entertaining!  Robins prefer to feed close to or from the ground. They will also use open style feeders with wide ledges, such as hopper feeders or tray and fly-thru feeders. They are easily spotted tugging earthworms from the ground or foraging for berries on bushes and high in trees, especially in the winter months. 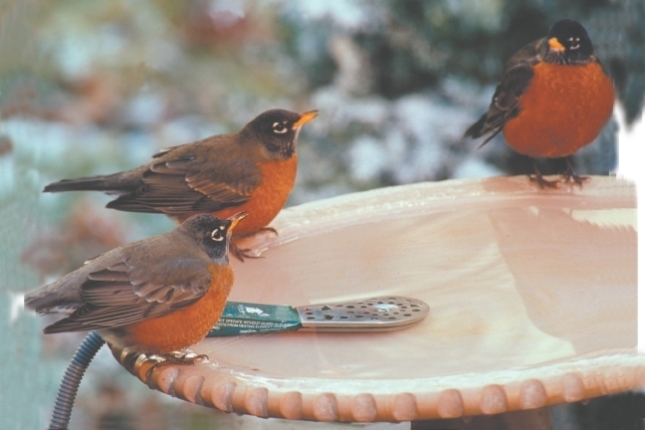 American Robins typically nest from April through July and can have 2-3 broods in a season. The female does the nest building and incubates the eggs alone. Unlike most birds, robins do not lay their eggs at sunrise. They lay their eggs several hours later during the mid-morning. Since earthworms are easier to find in the early morning, they feed first thing in the morning and then return to their nest to lay their egg. Upon hatching, both parents feed the average brood of four young. Robins will nest in trees, bushes and on man-made structures like light fixtures or in gutters. American Robins like to raise their families in a platform nest and will use a nesting platform with an open-front placed under the eaves, inside a garage or bar, or on the side of a building.